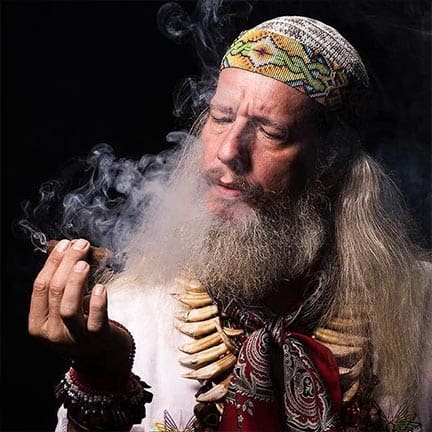 My path in yagé (Ayahuasca) began in 2009. At that time I was running a software company and at the same time, I was serving as the designated Belgian consul in the departments of Valle, Cauca, and Nariño (2006-2019). I was beginning to relate to the indigenous people of the Cofán tradition of Putumayo when a friend asked me for my house so that some indigenous friends could perform a ceremony.

Shortly afterward, the indigenous people of the Cofán community noticed that I had particular qualities and a great desire to learn about their culture, so they began to instruct me in their tradition. Nine months after starting my preparation I was authorized to give yagé (Ayahuasca). After four years of learning with the Cofán community, it was the Muisca Mamo Grandfather Comba Nymy Quene who invited me to receive training from the Muiscas, he is still my master today. For me, it was a great honor and a great opportunity, meeting the Muiscas changed my life and renewed my soul.

As a graduate of political science and law from the Santiago de Cali University (2006), I am at the service of indigenous communities to defend their rights and recover their traditions, centuries of knowledge that our society has not yet valued. I have received approval from different masters from the indigenous tribes Cofán, Siona, and Muisca to share yagé (Ayahuasca).⁠ I consider myself someone that brings the ancient tradition of Muisca to the Western world acting as a bridge between the Western civilization and the indigenous tribes.⁠

I cultivate and prepare my own medicine that is known to be sweet like honey, contrary to the bitter taste with which this ancestral drink is known. My ceremonies normally start with a circle of words, where I share ancestral knowledge like the Muisca cosmogony as well as personal stories. I speak Spanish, French, and English fluently. And on a more personal note, they consider me an inspiring storyteller that features a wonderful sense of humor.

Muisca means "people". They are people of the Andean highlands, grandsons, and granddaughters of the tobacco plant (wesika hoska), coca (fuhuza), and corn (aba). The Muiscas or Chibchas are indigenous people who inhabited the Cundiboyacense plateau in Colombia since the 6th century BC.

The Muisca civilization was one of the most advanced in South America. Chibcha society was based on an economy characterized by intensive agriculture, a variety of crafts, and considerable trade. The Muisca were skilled cotton weavers and excellent gold and emerald goldsmiths. They founded the current cities of Santiago de Tunja -the mythical city of Hunza, the main city of all the Chibchas, and the main political, administrative, economic, and spiritual center- and Bogotá in Colombia.

Guardians of oral tradition, weaving, and spiritual gold. Ancient peoples, and tribes of sacred offerings to Mother Earth (hicha waià). The Muiscas consider sacred many natural places such as mountains, hills, rocks, lagoons, forests, rivers, trees, and water sources, among many others, which they venerate, not only because they consider that some divinity lives there, but also because they believe that there are strategic places for the balance of nature.

For the Muisca indigenous society, plants are animated beings that interact with man. All plants possess various degrees and kinds of energy that give them the power to heal and transform. Coca leaves, yopo seeds, yagé (Ayahuasca) and tobacco (hopa hosca or rapé) are plants of knowledge. The priests, shamans, and other adult men of certain groups used them in their religious life, for communication with the supernatural planes, the Gods, or the Spirits of the ancestors. They are fundamental plants in the rites of divination, healing of diseases, and source of knowledge to make the best decisions for communities and their ecosystems.

We're here to help. Book a call with us today and get all of your questions answered about our safe Ayahuasca retreats in Europe, held in Barcelona & Ibiza, Spain.