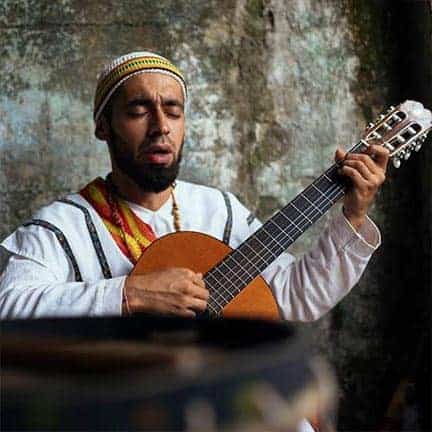 Guardian of ancient technology. Defender of tradition and values via guidance.

I am Andrés Trujillo Cerón also known as Zyta ïe (the path to the mountains, the serpent dance, the offering of sacred smoke). Medicine man, traditional musician and dancer from the Muisca (Muyska Chibcha) indigenous people based in central Colombia.

I was trained and continue to receive guidance from the Muisca Mamo Grandfather Comba Nymy Quene and my godfather Eric van den Hove as well as other women and men with ancestral knowledge to do healing ceremonies and offerings to Mother Earth. Interacting with the sacred plants of Native American cultures -such as Ayahuasca and Tobacco-, music and dance as a vehicle to create spiritual connection and harmonization of the psychic and energetic body.

Muisca means "people". They are people of the Andean highlands, grandsons and granddaughters of the tobacco plant (wesika hoska), coca (fuhuza) and corn (aba). The Muiscas or Chibchas are an indigenous people who inhabited the Cundiboyacense plateau in Colombia since the 6th century BC.

The Muisca civilization was one of the most advanced in South America. Chibcha society was based on an economy characterized by intensive agriculture, a variety of crafts, and considerable trade. The Muisca were skilled cotton weavers and excellent gold and emerald goldsmiths. They founded the current cities of Santiago de Tunja -the mythical city of Hunza, the main city of all the Chibchas and the main political, administrative, economic and spiritual center- and Bogotá in Colombia.

Guardians of oral tradition, weaving and spiritual gold. Ancient peoples, tribes of sacred offerings to Mother Earth (hicha waià). The Muiscas consider sacred many natural places such as mountains, hills, rocks, lagoons, forests, rivers, trees and water sources, among many others, which they venerate, not only because they consider that some divinity lives there, but also because they believe that there are strategic places for the balance of nature.

For the Muisca indigenous society, plants are animated beings that interact with man. All plants possess various degrees and kinds of energy that give them their power to heal and transform. Coca leaves, yopo seeds, yagé (Ayahuasca) and tobacco (hopa hosca or rapé) are plants of knowledge. The priests, shamans and other adult men of certain groups used them in their religious life, for communication with the supernatural planes, the Gods or the Spirits of the ancestors. They are fundamental plants in the rites of divination, healing of diseases and source of knowledge to make the best decisions for communities and their ecosystems.